Seeing Warcraft last week left such a bad taste in my mouth that I was forced to reconsider if I even wanted to go to the movies in the near future. I did though, and I’m glad that I did because seeing possibly; two of the funniest movies I’ve seen in a long time really took the bad taste of Warcraft out of my mouth.

First up, Popstar: Never Stop Never Stopping  which is the first official movie of the musical comedy trio Lonely Island which comprises of Andy Samberg, Akiva Schaffer and Jorma Taccone, a group who broke out on SNL over a decade ago with their digital shorts.

The film basically follows the story of popstar Conner Friel (Andy Samberg) who rose to fame with a 90’s boy band called Style Boyz which he formed with his childhood friends Lawrence (Akiva Schaffer). and Owen (Jorma Taccone). However, as successful as Style Boyz was, Conner eventually got too big for the band and decided to dumping his band members and going solo, releasing a highly successful  debut album “Thriller, Also.” The story picks up a couple of years down the road, Conner is on the verge of releasing his much-hyped follow-up album, “Connquest,” which he fails to realize is obviously terrible. His cluelessness is easy to understand once we see that he’s surrounded himself with “yes” people. When “Connquest” finally drops, however, Conner’s world begins to crumble. The album isn’t especially well-received (Rolling Stone gives it a shit emoji out of five) and Conner soon finds that he’s nothing without the true friends that he used to have. 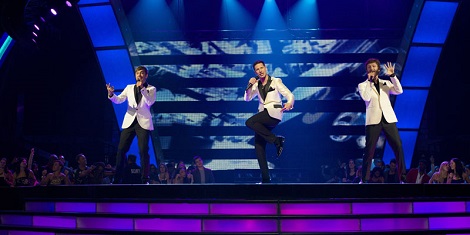 Now if you’ve heard Lonely Island’s music or seen their hilarious sketches, you’ll know that they’re very good at it. And this movie is basically that, an amalgamation of maybe twenty digital shorts and sketches.  You definitely get the feeling that they shot a lot of stuff and chose to use what worked best in editing. And no, Popstar isn’t exactly a story-driven movie either; in fact you could say the story is very predictable.

But it doesn’t matter. Because Popstar is really, really funny. The humor is very absurd but it’s more about moments, the jokes hit fast and the film moves very quickly, so the ones that miss don’t have a lot of time to linger. And it works both as three minute chunks and as an entire movie. Ofcourse, a lot of the credit goes to Lonely Island for crafting the really hilarious song lyrics and coming up with really sharp takedowns of the pop music industry. Especially a vicious takedown of Macklemore’s Same Love that is exceedingly funny. But I guess what’s surprising is that you genuinely care for all the characters despite how little time this movie gives to character development. 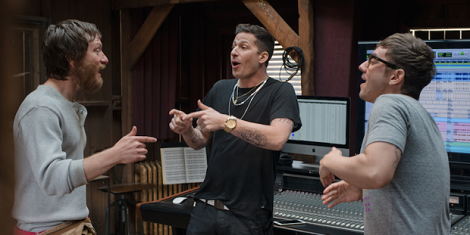 The film also happens to be loaded with cameos, both of musicians like musicians like; 50 Cent, Usher, Ringo Starr and that of actors like; Will Arnett and Martin Sheen. Bill Hader is particularly funny as a cinephile roadie who frequently indulges in the activity of flatlining, taken from the 1990 movie Flatliners.

Popstar: Never Stop Never Stopping is a hilarious satire on pop music facets and represents probably the best I’ve seen of the mock doc subgenre in sometime. It’s also one of the funniest movies of the year that you shouldn’t miss out on, especially if you’re a Lonely Island fan.