I believe that a film is only as good as the person behind it. And what makes this person, the director truly distinguished is how much of his vision he can incorporate into his film. Terry Gilliam is one such filmmaker who always manages to put his stamp on every film he directs. Gilliam’s films are mostly light-hearted surrealist fantasies that can be described as something between Monty Python and David Lynch. Fear and Loathing in Las Vegas is one of the most under-appreciated and underrated movies of Gilliam’s career. Based on the book by maverick novelist, Hunter S. Thompson, the film follows the story of Raoul Duke (Johnny Depp), an oddball journalist and his psychopathic attorney Dr. Gonzo (Benicio Del Toro) who travel to Las Vegas for a series of psychedelic escapades. 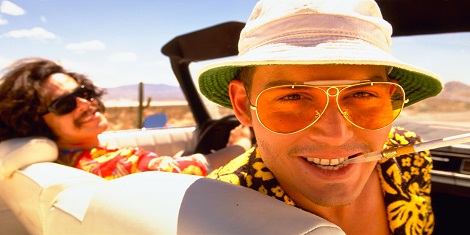 I’m not sure how faithful the film is to its source-material but Fear and Loathing in Las Vegas is a film that does not seem to have an actual plot, what little plot it does have seems to be on auto-pilot for the most part of the film, just randomly moving forward. There is no character development and the dialogue between the characters makes little sense, but is that really such a bad thing? Fear and Loathing in Las Vegas is a surrealist romp, it’s funny, absurd and makes little sense but the pointlessness of this film is what makes it so entertaining. The film’s absurdity is largely brought to the screen by Gilliam’s kinetic direction. The film constantly hammers you with surreal imagery and I doubt other than Gilliam could have brought something like this to the screen.

At its center, the film boasts two brilliantly audacious lead performances from Johnny Depp and Benicio Del Toro. Both actors have gone completely bonkers for their roles but Johnny Depp is the real scene-stealer as Raoul Duke. As someone who excels at playing eccentric characters this role seems tailor-made for Depp and needless to say he does an excellent job with it. Aimlessness is basically what this film seems to be about. It’s a throwback to the pointless and psychedelic drug counter-culture of the 1960’s but being aimless makes the film incredibly disconnecting as well. I had a great time watching this film but at the end I couldn’t really care about any of the characters or the story.

All in all, Fear and Loathing in Las Vegas is an entertaining and fun film that shouldn’t be taken too seriously. The film is both meandering and pointless but being pointless is essentially the point of the film. Terry Gilliam’s direction really comes through and the film is an absolute visual treat. An enjoyable film but not for everyone.